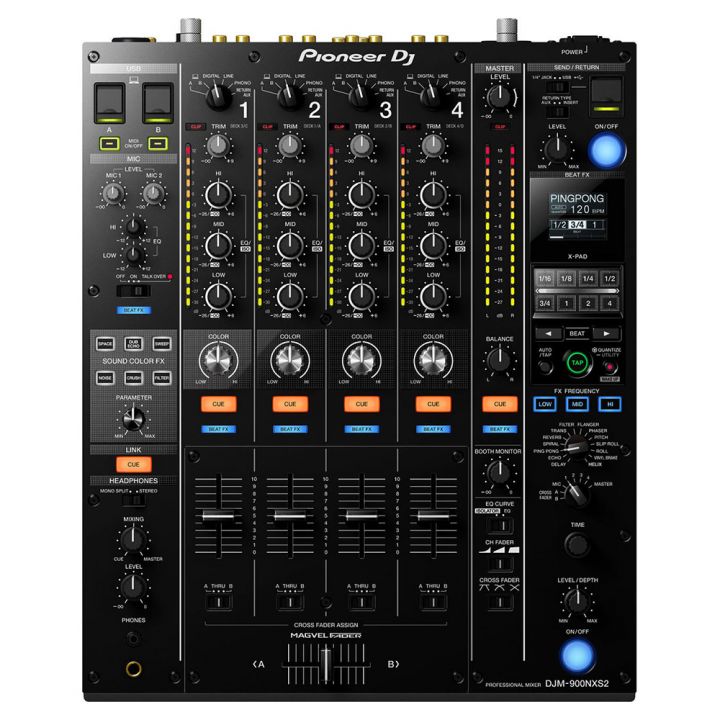 Skip to the beginning of the images gallery

Seen it cheaper? We aim to match authorised UK dealers

The Pioneer DJM-900NXS2 follows in the path of its predecessor the DJM-900 nexus with improved FX, new top-quality audio parts and even more control. This mixer really does have it all and more!!!

Figures shown above are approximate.

The Pioneer DJM-900NXS2 Professional DJ Mixer follows in the path of its predecessor the DJM-900 nexus with improved FX and new top-quality audio parts.  Incorporated within the robust casing, the mixer has been fitted with a pioneering 64-bit mixing processor, enabling the sound to be more innate and meticulous.  In addition to this there is also a quality 24-bit/96kHz soundcard, direct digital connection and improved analogue input.

The controls on the unit have been enhanced and are even more receptive as a result of a new gain structure, better EQ and fader curves, more precise clip indicator and peak limiter.

The DJM-900NXS2 MK2 now has even more scope for managing sounds and effects.  There are 14 Beat FX including the new Vinyl Brake, Pitch, Helix and Ping Pong and improved Reverb.  The FX Frequency allows the frequency range to be applied to effects, larger X-Pad with OLED screen for simpler viewing and a channel selection LED to instantly see which Beat FX is applied to which channel.

Within the 6 Sound Colour FX there is a parameter knob which modifies settings for each effect, Gate/Comp has been replaced by Sweep and larger knobs allowing for even more precise and personal modifications.

There is an autonomous Send/Return which means a decision does not have to be made between Beat FX and External FX, instead an external FX controller(e.g. apps on an iPad) can be connected and then layer it on top of the on-board FX.  Brilliant stuff!

Andy Kayll, sound engineer at DC10 says “I played a couple of tracks on the DJM-900NXS2 and I was quite astounded, it sounds like no other Pioneer DJ mixer I’ve heard,” and that “Going up from 32-bit to 64-bit, the sound is so much more accurate and natural, you can hear it's much warmer.

DVS support, Two USB ports and 4 Phono Inputs for total flexibility and flawless DJ handovers The DJM-900NXS2 has several inputs to offer you complete freedom to DJ with the source of your choice:

Pro DJ Link via LAN or USB unlocks several advanced features
Pro DJ Link lets you connect and share source information on up to 4 multiplayer’s, see detailed rekordbox information and unlock numerous other advanced features including the admired Quantize. You can also connect a PC/Mac with just one USB cable to control rekordbox DJ and other DJ software with all 4 players.

Got a question or need assistance? Get in touch, we're happy to help.

See what our customers say

The DJ Shop prides itself on providing outstanding customer service, is a powerhouse of knowledge and retails superior quality brands within the DJ and Music Production industry.

The DJ Shop is the UK's leading DJ Equipment Finance retailer and liaises with some of the most prestigious DJ Finance lenders in the UK.

Discover our flexible delivery options including free and next day availability, along with The DJ Shop's fair returns and usage policy.

Join for special offers and once in a life time deals